The Sanctuary of St. Anthony at Capo Milazzo

The story of the Sanctuary of St. Anthony at Capo Milazzo

On the western coast of Capo Milazzo there is the quaint shrine dedicated to St. Anthony of Padua, made out of a cave used in the past as a shelter both by fishermen and the Saint himself.

In January 1221, while the Portuguese friar was sailing from Africa to Lisbon, he was caught by a violent storm and because of it his ship was blown off course. Hence, he reached the promontory of Milazzo and stayed there for a few days.

In 1500 a hermit arranged the cave and placed an image of St. Anthony, consequently turning it into a place of worship. Later in the XVI c., after more works, it became a proper church.

The Sanctuary of St. Anthony, set in an enchanting surrounding, is regularly attended by believers, especially on June 13th, the day of his feast.

In fact in the past there was an endless stream of people reaching the Sanctuary either by carriage or on foot. Nowadays they use more motor vehicles creating a roaring flow, even if there are still believers walking up to the promontory.

Inside, first of all, the church is decorated with marble medallions representing the different miracles worked by the Saint.

Leaving the shrine and walking up back to the square of S. Antonio, the view over the promontory is magnificent, everyone can admire sweeping views over Monte Trino, the promontory’s high peak, the superb bay below, the Nebrodi mountains and most of all, the Sicilian shore. 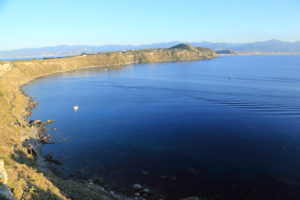