Isabella Conti Eller Vainicher received a silver medal in 1967 from the President of Italy for her meritorous activities in school and culture. Then, in 1984 a gold medal in memory of her was given. But several aspects of this great woman make her stand out. For instance, her love for the Aeolian islands and the Aeolian children, and her passion for the cultural heritage too. But her personality and motivation are above all the most peculiar key points.

In 1947 she founded the first local tourist office of the Aeolian islands. In the 1950s she opened a hostel at the so-called castle of Lipari. She laid the foundation for tourism on Vulcano where curious tourists arrived after having watched the movie Vulcano with Anna Magnani.

She got married to Riccardo Conti and they had 4 children. She solicited the school’s building. Isabella personally took children’s education of the Aeolian archipelago.
She was born in Naples in 1906 and she was the life of the school. After the degree in Natural Science, she reached Vulcano in 1929 because she had to carry out research on the island. Here she opened the first school. So, children had the opportunity to study where they lived. Later, in 1943, both lower and upper secondary schools were established thanks to her determination. The British governor of the Aeolian islands appointed her to manage the schools of the archipelago. In 1946 a school subdivision was opened in Messina, that is Istituto Jaci, and Isabella was the headmistress for 12 years.

Moreover, Isabella Conti put effort into archaeology. Next to the school in Lipari the Antiquarium was established, which contained discoveries from local excavations. She was in fact an active supporter of it; a lot of letters to the important archaeologist Luigi Bernabò Brea, Superintendent for Antiquities in Syracuse at that time, demonstrate her interest. 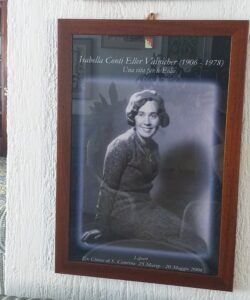 In the postwar period, Isabella Conti worked hard at the protection of the Aeolian archaeological finds in order to establish the first nucleus of an Archaeological Museum in some rooms of the lower secondary school and she was charged with the safety of the exhibited objects.

It is useful to remember what Isabella wrote to the main office for education of Sicily in 1950: