The Saint Saviour monastery in “lingua phari” of Messina

The monastery on the sickle of Messina

The Saint Saviour monastery in lingua phari of Messina was built on the sickle of the harbour, the so called peninsula Saint Ranieri. Its construction dates back to the reign of Roger II between 1022 and 1132.

The foundation of the Saint Saviour monastery  is connected to the history linked with Bartholomew of Simeri. He was a monk in Rossano Calabro and the founder of Saint Mary Odigitria monastery, which is known as Patirium. According to a biography, Bartholomew was designated by Roger to establish a new Basilian monastery in Messina.

In 1131 Roger II ordered that the monastery was called Archimandrite. First it supervised 35 religious institutions among churches and monasteries, but this number increased till 62 monasteries.

Luca was one the Bartholomew’s followers. Bartholomew had named Luca as first abbot of the Saint Saviour monastery. This event led to a real cultural rebirth marked by the best byzantine tradition. Therefore the town of Messina became one of the most fertile and intense artistic places. In fact it shined for the presence of a very good school of art and professions in the calligraphy. Luca founded the first centre of the library of the Saint Saviour monastery. So many codes were brought from the monasteries, which depended on the Archimandrite and other codes were produced in the scriptorium. A lot of the works written by the amanuensis in the monastery represent an important part of byzantine codes.  But this heritage was lost during the centuries and the town of Messina had only 175 books now.

A shelter on the sickle of Messina

From a military point of view the monastery played a defence role. In 1342 it was the last shelter for those people, who rebelled against the reign’s vicar Duke John. Then, in 1356 it was a shelter for the Angevin ranks, that landed at Sicily again after the “Sicilian Vespers”.

In the 16th century Charles V decided to destroy the monastery, in order to build a fortress there. In this case his military reasons were preferred instead of those religious ones.

After that a lightning destroyed the church too, another place was consequently chosen to house the new monastery. It was built on the opposite side, that is exactly the area where there is the 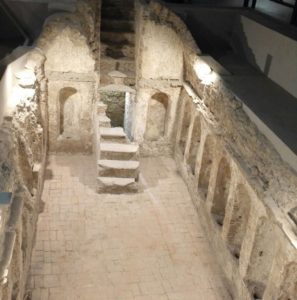 Crypt of the monastery

While the new museum was building, a crypt was found out, which was under the church’s nave of the monastery. The crypt consists of sixteen niches-drains, in order to mummify dead bodies.

Thanks to the paintig “Crucifixion” by Antonello da Messina (Muzeul National Brukenthal, Sibiu, Romania), we can admire the original layout of the S. Saviour monastery in lingua phari.