The Tamburini pipe organ of the Cathedral in Messina

The Tamburini pipe organ of the Cathedral testifies the willpower of Messina, that was destroyed by the 1908 earthquake and during the 1943 bombs. But the city has risen again. 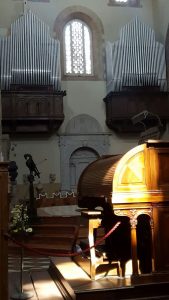 It is one of the world’s biggest pipe organs. In Italy, it is the second largest one and its name derives from the famous italian craftsman Mr. Giovanni Tamburini of Crema town. The organ was commissionated to this firm by the church of Messina. In fact at the time Tamburini company, founded in 1893, was the best firm among the other ones.

A system of electric transmission was created, in order to guarantee the flow of air through pipes in a more functional way. On June, 13th, 1943 the continuing Anglo-American bombing raid damaged Messina and its Cathedral. But the pipe organ had been inaugurated only 10 years before, so it was seriously broken. On August, 8th, 1948, thanks to the Archbishop Paino, the Cathedral of Messina had a new pipe organ.

The console runs its 169 registers and is located on the transept on the right, but it can be moved till a range of 20 meters.

It has 15.700 pipes divided in 6 groups. The biggest one has 30 cm of diameter base and is 20 mts high. It is necessary a huge quantity of air produced by some bellows served by 6 engines.

As the first organ, also the new one consists of a system of electro-pneumatic transmission, so to provide a multistereophonic sound combination corroborated by 6 groups of pipes, 5 of them are distributed all around the transept and the sixth one up to the main gate of the church.

Finally everything can assure an harmonious timbre mixture of strong impact and richness confirming the great value and complexity of this marvellous sound machine.

Listen to a concert