Since many centuries the Assumption of the Virgin Mary has been celebrated in Messina on 15th August with the extraordinary procession of the Vara of Messina.

La Vara of Messina was born in 1535. It was a triumphal cart and celebrated the arrival in the town of the King Charles V, who came back after having won the battle of Tunis and La Goletta against Ariadeno Barbarossa.

Afterwards, the cart was changed with the aim to celebrate the Assumption festivity.

This cone shaped devotional machine represents the Assumption of the Virgin Mary from the bottom to the top.

The base, named cippo in Italian, consists of a coffin holding the figure of the Holy Virgin Mary’s dead body.  On top the Heaven is shown. According to the Ptolemaic geocentric system, the Earth is in the middle, the Sun and the Moon with the planets turn around the Earth. Finally, the Earth with the stars and the image of Christ are placed. Jesus Christ supports his mother’s soul in the palm of his hand raising her to Heaven. The whole structure is surrounded by several angels.

In the past, all the figures of “La Vara” were alive. After some accidents, that fortunately ended without any victims, the children were substituted with figures of wood and papier-mâché.

La Vara is 13,50 meters high and about 8 tons weigh. Long tow-ropes are used for dragging it. Over thousand blue and white dressed people, who are called capicorda, vogatori e timonieri in Italian (leaders, rowers and helmsmen), guided by their leader, sing hymns such as Viva Maria to the Holy Virgin Mary and drag the machine on iron slides along the wet roads. 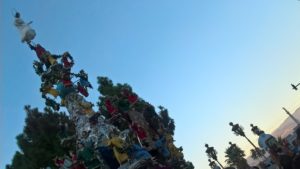 First, on 1st August this system is prepared at the Square Castronovo. Step by step each of the elements of the whole structure are put together until the evening between August 14 and 15.

Finally, on 15th August at 7 p.m., firecrackers go off and the leader starts the procession. La Vara is dragged along via Garibaldi between two sides of a crowd. Once at the crossing of via I Settembre the most difficult part of this event can be seen: the Vara is turned and then it arrives at the Cathedral’s Square.

After having been blessed by the archbishop, the faithful go into the Cathedral, in order to pray during the Mass. In conclusion, the ropes are divided into small pieces among the faithful.