Among his noticeable actions:

Due to those feats he was nicknamed the Sinker and hero of Premuda.

She was launched in 2015 and commissioned on April 20th 2017. On October 4th she docked in Milazzo harbor and on October 8th in the morning the ceremony of the War Flag conferment was held. All battleships have one.

The ceremony was attended by the Undersecretary of Defense and by the local authorities, by the Commanders of the Italian Navy and of the Corps of the Port Captaincies and Coast Guard. 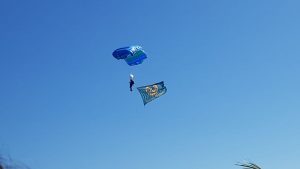 The youngest Navy NCO brought on board the new frigate the War Flag. Along with it came the flag of the Teseo Tesei Diver and Raider Command Group. The ceremony continued with two paratroopers jumping out of a helicopter in free fall holding the Italian flag. At the end fire blanks were shot from the frigate.