In fact Sicily is an Italian region well known for its excellent food. You will be conquered by its pasta recipes, fishes, cheeses. And of course you cannot forget bakery.

Cannoli and cassata are true ambassadors of Sicilian taste. They are so famous, that they have been printed on clothes and bags from a famous Italian fashion brand. But not many people know the delicious and tasteful Torta Savoia. Probably less people know its history.

Creation and birth of the Sicilian Savoy Cake 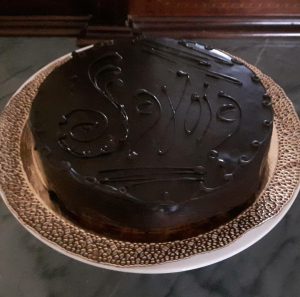 “Savoia” (Savoy in English, Savoie in French) is the name of a today Alps region. But it’s also the name of a royal family originally coming from there.  House of Savoia has ruled Italy from 1861 – when Italy was united in a kingdom – to 1946, when Italian people chose to end the experience of monarchy through a referendum.

Before being kings of Italy, Savoia had also shortly been kings of Sicily between the years 1713 and 1720. So Torta Savoia name, the Sicilian Savoy Cake, is related to both the historical moments.

According to Catania citizens, the delicious cake was invented almost 160 years ago by the nuns of the Benedictines Monastery after the annexation of Sicily to the new Italian Kingdom. Torta Savoia is rich in Piedmont hazelnuts. This wanted to be an homage to the new royal family.

While Palermo people think that the creation of Torta Savoia is much more ancient. The cake would have been created by a Palermo pastry chef to homage the coronation of Vittorio Amedeo of Savoia as king of Sicily, in the far 1713.

Torta Savoia, a perfect match for a winter afternoon

We don’t know who is right about Torta Savoia origin, but we definitely love this tasteful winter cake.

You can find Torta Savoia in the windows of pastry shops from October to March. The Sicilian Savoy Cake is characterized by layers of thin biscuit sponge cake and hazelnuts and chocolate cream. Everything is covered by a yummy dark chocolate topping.

Well, we suggest to serve a slice of Torta Savoia with a spoon of fresh panna and a good tea. Nothing better for a cold winter afternoon spent with friends!

Would you like to try to prepare the Sicilian Savoy cake? Here we have in Italian Torta Savoia recipe. But a foreign pastry chef can have a look at our translation:

For the biscuit sponge cake

For the chocolate hazelnut cream

Put in a bowl eggs and sugar, and beat them until you get a clear and puffed dough. Add slowly honey, and flour and starch previously sifted, mixing down to up. Make the dough out in six layers of about 2-3 mm (0,1 in) over six different 22 cm (8 in) diameterpans, previously buttered e floured. Bake in oven at 200° C (392° F) for about 7-10 minutes, until the dough has dried. When it’s ready, pull the biscuit sponge cakes out of the pans and let them stand.

Then prepare the chocolate hazelnut cream. Melt the two kinds of chocolate together, then add the hazelnut praline and mix the ingredients until you get a uniform cream.

After that, pull the cake out of the pan and cover it entirely with a topping made with dark chocolate and butter melted together, leaving a part of this topping apart. Finally, decorate the cake with the rest of the topping (the most typical decoration is the word “Savoia”) and let it stand one day before serving.