The Roman naval ram from Acqualadroni

At the end of summer 2008, at some 300 m offshore Acqualadroni, a hamlet on the Tyrrhenian coast of Messina, a Roman naval ram was retrieved from a depth of 7-8 m, by the Italian Coast Guard and the Soprintendenza del Mare (the Sicilian Authority for underwater archeology).

It was one of the most important archeological find for Messina. Today the ram is on display at the Regional Museum of the city, in the Archeological section.

It belonged to a ship which probably sank in that area. No wooden parts were preserved except for the timber fitting into the ram. Some small lead bars were also retrieved some 15 m away from the ram.

Acqualadroni had already been explored. In 1991 a shipwreck was found, probably related to the naval Battle of Naulochus, fought in 36 BC between Octavian and his general Agrippa against Sextus Pompeius.

But what is a naval ram and what was its usage?

A naval ram (rostrum in Latin) is a thrusting weapon that was fit to the bow of ancient galleys, to break the hull framing of enemy ships. Sailing at high speed ships would ram the hull of enemy ship opening a leak and so causing her quick sinking.

In ancient times rams were not only used as a design element on coins and on earthenware depicting war ships, but also on memorials of the Forum in Rome, in Ostia and in Cyrene.

Description of the Acqualadroni naval ram

The bronze Roman ram of Acqualadroni is made of three horizontal stout fins cast together reinforced by a solid vertical one. It is well preserved, except for some concretions on the top portion. It is 1,33 m long, 0,59 m wide, 0,90 m high and it weighs 250/300 kg. 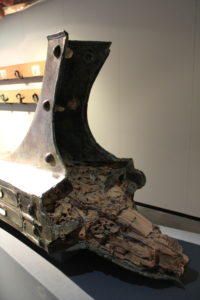 Unlike other Roman rams found around the Egadi Islands, decorated with astragals, winged goddesses, helmets adorned with feathers or floral elements, ours is decorated on each side by three swords of two different shapes, that turn into a trident.

As far as the swords are concerned, there are;

The Kopis is a curved blade weapon with a single edge cutting. Its pommel shows an eagle’s head or a griffin’s head. This weapon was frequently used by Greek armies as from the V century BC, it was later adopted also by Romans during the Roman Republic period.

The Xiphos is a typical hoplites’ weapon, also used in the V century BC. The hint, on the blade side, is indented, imitating ram horns.  On the top pommel there is a double conic decoration.

When was it made ?

There is still a dispute over the dating of the naval ram, as there are different theories. It could have belonged to one of the ships, that was part of the fleet involved in the First or Second Punic War or in the Battle of Naulochus.

Therefore it could date back from the III century BC to the I century BC. It must have belonged to a ship which might have gone adrift up, in order to reach the Acqualadroni sandbank. Or it might have undergone an accidental event. In any case, we are certain that this naval ram is Hellenistic, due both to the metal and to the decoration.

Then it was hauled up, the naval ram underwent several chemical analysis and a long restoration.