The procession of Saint Francis of Paola

Every year the inhabitants of Milazzo celebrate Saint Francis of Paola, on the first Sunday of May. They celebrate the saint with a particular procession.

The solemn procession takes place in the afternoon: the saint’s statue leaves from the side door of the Sanctuary with hundreds of believers. A group of men, the bearers, called ‘mbuttaturi,  carry the statue of the Saint on their shoulders along the streets of the town. 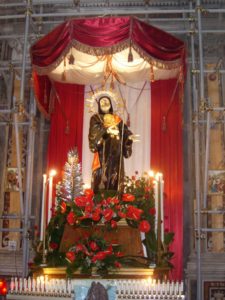 The procedure of the procession of Saint Francis of Paola

Later, the procession heads towards the streets of the old town. At the church of Our Lady of the Rosary the procession changes way and the statue is carried, almost in a rush, along the steep stairs that lead to the castle.  The devotees stop at the entrance of the fortified citadel, where Saint Francis was welcomed at his arrival in Milazzo in the 15th century. And not only, here he received  the city’s keys. Close to the fortified Citadel he built the Sanctuary now dedicated to him.

From here the procession continues on downhill towards the centre of Milazzo and the harbour.

Along the way the procession reaches the port of Milazzo, at this point, ships and other boats welcome the statue sounding the sirens.

Afterwards, the statue of Saint Francis of Paola is placed on a ship and all the people stop, in order to listen to the preaching of a friar, part of the Minim congregation. In fact this congregation was founded by the Saint himself.

After the preaching, the procession goes on towards the Marina Garibaldi, the Vaccarella district and back up towards the Borgo, the uppertown.

The bearers climb the so-called Saint Francis hill and reach the Sanctuary without stopping. The way of going into the church is peculiar, because  the bearers go in and out three times from the side door with difficult movements.