The origins of the “Nacatuli” and Aeolian food

The millenary history of Aeolian Islands people has been marked by the alternance of prosperity and difficulty, domination and isolation, through which customs and traditions were experienced. Therefore these “Nacatuli” cookies are the result of reciprocal exchange of food habits.

Many different people landed in the Archipelago: Greeks, Phoenicians, Romans, Arabs and Normans; Saracens ravaged, then an economic and demographic rebirth came back due to the commerce activity of the Mediterranean sea includeing the Islands and its Malmsey wine production.

“Nacatuli” local cuisine recipes are strictly based on these genuine ingredients locally produced.

Beside the most simple “Cassatiedde”, “Vastidduzze” and “Spicchiteddi” cookies another delicacy stands out:  the”Nacatuli” cookies, that only in the wealthy families were consumed  in large quantities.

Except sugar and cinnamon, the ingredients of  Nacatuli are only local ones. Sugar was produced by the Swabian also in Sicily and used for some special events. Cinnamon came from India.

The preparation of the “Nacatuli” needs a team work. In fact, in approaching of Christmas, family women gather at home and prepare sweets. Each one has a task:

Afterwards the stuff is placed on a thin layer of dough and then covered with another layer. But the expert Aeolian women hands embellish “Nacatuli” cookies very well pinching them by using a tool, which is named “pizzicaruolu”: it is a small knurled brass tweezers and it grips the dough showing a very fine decoration similar to a precious embroidery. Also the embroidery clippers helps to realize some other draws making some small cuts on it. At the end the decoration is completed by adding some little dough rose shaped. After having cooked in the oven, the “Nacatuli” miraculously become a unique example, a gem of delicious citrus and cinnamon perfume. Finally the cookies are layed down on a wonderful white engraved cloth rea 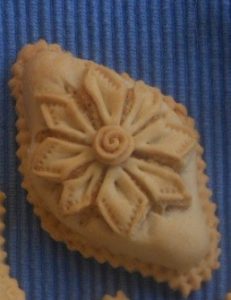 dy to be showed to the guests.

The “Nacatuli” sweets firmly show themselves so delicate, gilded, perfumed like the Christ Child. They are worthy to represent Christmas time.