Architect Rosario Vilardo, recently appointed Director of the museum, has conceived a special project named Nights in Art . The aim of this proposal is to enrich Lipari’s cultural offer, thus giving tourists the possibility to pay a visit to the collections at extended opening hours.

Partner of this project is the Associazione Guide Turistiche Eolie Messina Taormina who will be in charge of guided tours held during late opening hours.

Admittance fees are: 6 Euros for adults, 12 Euros including the guided tour

3 Euros for youngsters between 18 and 25 years of age, 6 Euros including  the guided tour

Free entrance for children under 18

For further information on late opening hours contact 090 9880174 or send an email to urp.brea@regione.sicilia.it 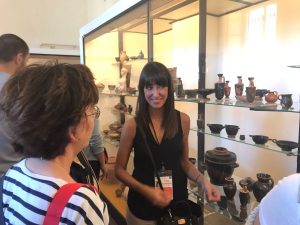 The Museum hosts unique archaeological collections covering millennia of history. From the Neolithic to the Late Bronze Age, from the Classical pavillion including findings which allow a full view on both the Greek and Roman civilization in the Aeolian Islands  like the splendid grave goods from the necropolis ( among them the little theatrical masks, a real enigma for all scholars) to the exciting Underwater Archaeology section, the Museum holds countless treasures of the Aeolian Islands glorious past which is also documented outdoor, in front of the main building. There you will see ruins of Bronze Age huts together with different layers spreading from ancient Greek to Roman times.

The Nights in Art proposal is set at times of the day when a guided tour is even more interesting and fascinating because of the magical nocturnal atmosphere in Lipari’s ancient acropolis.