From the kaolin quarries to Saint Calogerus: different faces of Lipari 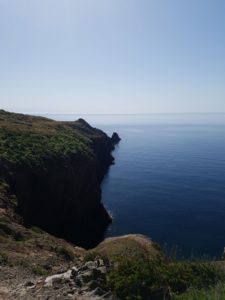 That is an excursion from the kaolin quarries to Saint Calogerus. We land on Lipari by hydrofoil or ferry boat, we rent a private vehicle or go up a public bus and we drive towards the western side of the island of Lipari. We are now in the district of Quattropani. Go along a road through some hairpin bends in the luxurious vegetation of the island, between headlands and volcanic valleys. First stop, what can you see?

This rock includes kaolinite, a clay silicate. The kaolin quarries were used from the old times to the 1950s. The usages of kaolin were several:

The island of Lipari presents its oldest side from a geological point of view, here we can see an aspect of secondary volcanism. Clay formations have some different coloured shades on the surface, they are caused by the fumaroles.

The Painter of Lipari

Greek artisans mixed kaolin and clay in order to make their vases, which are on display in the Archaeological Museum of Lipari. In fact, many ceramic fragments have been found in the quarries. The Painter of Lipari used a light brown clay between the IV and III centuries BC, then he depicted the figures using pastel colours. So, his light colour derives from the white colour of the kaolin, which is the background for overpainted rose, yellow and light blue figures.

The western side of the island 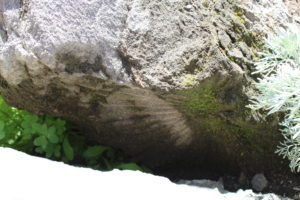 Several sediments occupied the lake, that there was 100.000 years ago. The sediments covered the previous plant life. In fact, some fossils of Mediterranean dwarf palms were discovered. The suburb Palmeto (palm grove) takes its name for the presence of this particular plant nowadays. Then, in the spring season, we can enjoy the sight of the orchids and the royal seagull.

It’s time to move on again! Reach a thermal tholos, that one of Saint Calogerus.

Unique monument of the Mycenaean architectural art out of Greece

The tholos dates back from the Old Bronze age to the Roman period. The oldest part consists of a circular thermal stove with a dome shaped roof:  this is exactly like the tombs, that are tholoi, in the Mycenaean Greece in the XVI and XIV centuries BC. Our heater is smaller, because it was used for maintaining the heat. It leans against a rock, a warm water spring flows inside still today.  The structure is made of:

Greeks, Romans and Byzantines used it, as we can understand from the pottery, which was found out here. Some basins were added by Romans and in 1867 some benches of marble were arranged near the wall. They were clearly useful to the patients. In fact the thermal springs were healthy, according to Greek and Roman writers. Waters have a temperature of 50 degrees centigrade, they aren’t very deep and derive from rainfalls. But they have volcanic elements, therefore they are rich in carbon dioxide and hydrogen sulfide.

The thermal baths are named after the saint. Due to a medieval legend, Saint Calogerus permitted the flow of the waters from the mountain.  In 530, after a decaying period, because of an earthquake in the IV century, Saint Calogerus started up the thermal baths again. The hermit monk Calogerus, from the Greek language “good man”, went to Lipari, in order to preach Christianity and take care of ill people using the sulphurous water. At the same time he converted a lot of inhabitants. A silver reliquiary bust represents him in the Cathedral of Saint Bartholomew of Lipari.

The life of the tholos

The first document concerning the tholos of Saint Calogerus is a drawing by Jean Houel in 1782. Unfortunately a strong earthquake in 365 AD damaged the thermal baths of Saint Calogerus. Some experts in the XVIII century, for example Spallanzani, stated the healthy qualities of the spings, above all for skin diseases. But the building suffered also decay. The thermal building was closed in 1975, it was previously opened in 1872. The management was entrusted to many people, that were unsuccessful in gaining money as they would have liked, because of historical events and natural disasters. Several projects were designed for the hygienical-sanitary adaptation of the structure. But the thermal baths were not reopened again, they are now only a museum to remember the past.

In conclusion, thanks to this excursion you have surely a chance to learn a lot of things about Lipari from different points of view: geology, botany, archaeology and history.