Casa Cuseni, a house in Taormina

At the beginning of the 1900s Robert Hawthorn Kitson arrived in Taormina from Leeds. He wanted to recover from a rheumatic fever in this small town, which enchanted him. Therefore he decided to settle down here. Kitson was a very versalite person. He liked collecting many paintings and works of art, because of his passion for the English contemporary art. He worked as an engineer and painted very well using water colours. Finally, he designed a villa with a garden, named casa Cuseni.

This house was built on a steep hill outside the old walls of Taormina. The Italian Renaissance villas inspired Kitson to design his house, particularly the Palladian architecture. He used the same rectangular layout with two symmetrical jutting sides and some columns supporting a terrace. 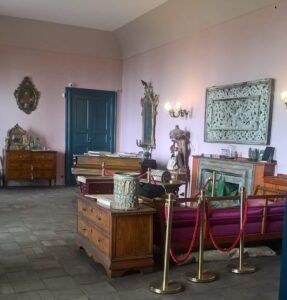 The most interesting part is the dining room. That’s a small but important creation according to the Arts and Crafts movement, which developed in England in reaction against the impoverishment of the decorative arts concerning common objects. It advocated a reform of the applied arts.

Frank Brangwyn designed this room’s furniture in 1908. The Belgian artist was a friend and master of Kitson. Brangwyn indeed decorated the upper part of the dining room with figures, fruit and flowers during his stay in Taormina.

Moreover, the garden of Casa Cuseni is significant. It consists of different levels with steps and paths full of many big jars, tanks and Rococo fountains. 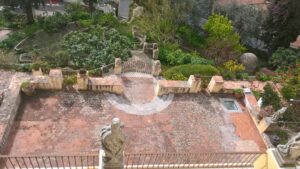 This garden is rich in cobblestones like mosaics just behind the house, due to Arts and Crafts movement, which encouraged to use local material. Although the cobblestones were first used in the Tuscan garden in the 17th century, later they spread across East Sicily from Catania to Siracusa.

While a narrow way leads to the most refined masterpiece: a pool surrounded by an arbour. Guests can even observe Mount Etna reflected in the water.

The Nazis confiscated the villa in the World War II. Later, Kitson’s niece, Miss Daphne Phelps lived here. Therefore Casa Cuseni became a meeting point for famous philosphers, artists and writers. Daphne turned it into a lodging house in order to earn money useful for the building and herself. Everything is told in her book A house in Sicily.

In conclusion, now Casa Cuseni is an art museum and a reference point for the Grand Tour of Taormina. It belongs to the  “Memory houses”, a museums network regarding many important intellectuals’ houses in Italy.